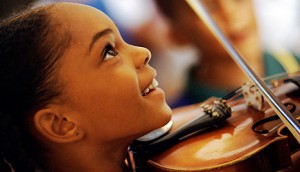 Most parents are probably so focused on just getting our kids to play an instrument that we don’t give much thought to the question: “What’s the right instrument for my child?”
Quite honestly, on the list of things I’m supposed to keep in mind as a parent, I never knew such a question existed. Until now.
Ron Chenoweth is the band and orchestra division manager for Ken Stanton Music, a Georgia-based music education company with nearly 100 teachers providing more than 1,000 lessons every week.
Part of Chenoweth’s job includes managing a team that regularly goes into schools to help band directors determine what instrument each student should play. Two things he and his colleagues are always looking at are body type and personality.

If a child likes to be the star of the show, Chenoweth might steer the child to the flute because flutists tend to stand in front of the band.
“I look for the kid that’s smiley, happy, sometimes talkative, rather than just very, very quiet,” said Chenoweth, who has been with Ken Stanton Music for 16 years. “They usually are asking questions and they’ll say, ‘Well, I want to do this because … ‘ and so they’re telling you their story.”
Other instruments for extroverts, Chenoweth says, are the saxophone and trumpet.
“They tend to be lead instruments, whether a jazz band or a show band. They play that higher melodic part, and these kids tend to be almost uncontrollable at some point,” he said with a laugh. “But they just are very outgoing. You don’t really see the quiet ones go that way.”

How body type factors in

Physical characteristics can determine the best instrument for a child too. Take the bassoon, for example, which isn’t ideal for small kids.
“The bassoon, when assembled, is almost 6 feet tall, and the spread of the finger holes is ridiculous,” he said.
Someone with very small lips might be better suited for the trumpet or French horn, while someone with larger lips might have trouble playing those instruments, according to Chenoweth.
“The cup size of a trumpet or a French horn would be too small, and they wouldn’t actually be able to produce a good sound,” said Chenoweth, who played the French horn in his high school and college marching bands and has been involved in music education ever since.
“And then sometimes you’re surprised. … Somebody you thought ‘Oh, they’ll never get the sound out of this trumpet,’ and away they go.”
I asked Chenoweth what personality and physical attributes might lead to success with other instruments:

Let them play what they want to play

Even before you start assessing whether an instrument matches your child’s personality, or if they have the right body type for success, you should let your child be the guide, Chenoweth says.
“My first thing is you have to get them onto an instrument that they first are interested in because if there’s little interest in playing it, there will be the same amount of success — very little,” he added.
Try not to push them to play what you played, said Chenoweth. “Private lessons at home with the parent are not necessarily going to be successful,” he said with a laugh.
And always try to be supportive, even when it just might not be music to your ears.
“We all know that the sounds are not going to be great,” said Chenoweth, but parents should try to stay positive. That means avoiding comments such as, ” ‘Oh here we go. Here’s something new to try for three months and then you’re going to give it up. Are you ever going to pick something that you’re going to stick with?’ “

Dr. Nina Kraus, professor of communication sciences, neurobiology, and physiology, and the director of the Auditory Neuroscience Laboratory at Northwestern University, has been studying the impact of music training on a child’s cognitive development for almost a decade. Her extensive research has been published in more than 200 journals and media publications.
Defining a musician as someone who plays music twice a week for 20 minutes, she and her team compare how the brains of musicians and non-musicians respond to sound and the impact music playing has on the musician’s attention, language, memory and reading abilities.
“The same biological ingredients that are important for reading are those that are strengthened through playing a musical instrument,” said Kraus. “The ability to categorize sounds, to pull out important sounds from background noise, to respond consistently to the sounds in one’s environment … these are all ingredients that are important for learning, for auditory learning, for reading, (and) for listening in classrooms.”
Her findings, she said, have a clear message for policymakers and parents.
“It’s not just about your child becoming a violinist,” said Kraus, a mother of three whose children all played an instrument growing up. “It’s about setting up your child to be a more effective learner for all kinds of things.”
And the benefits continue even after a child stops playing, says Kraus.
“The brain continues to profit long after the music lessons have stopped,” she said. (To visualize Kraus’ extensive research and comprehensive findings, check out her slideshow.)
If my girls weren’t already signed up for music lessons this fall (we’re starting with piano!), I’d be signing them up today.
(By Kelly Wallace, CNN)